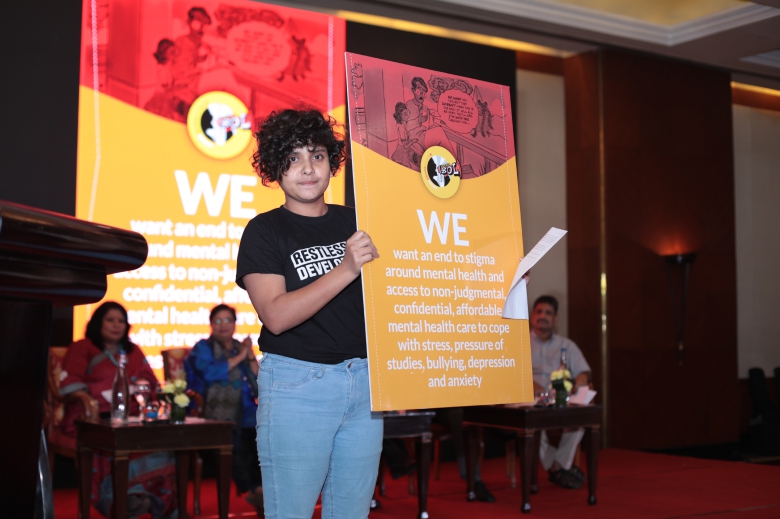 Dissemination Event - Release of the findings of YouthBol Poll

Over a 10-month period, more than 1,00,000 10 to 24 year-olds from across India were asked to identify what they consider the most important issue related to their health and well-being. The poll, conducted both on the field and online, was designed to give policymakers an understanding of what youth in India want when it comes to health-related policies and programs.

The dissemination event highlighted some of the key findings of the poll. In particular, 36 percent of the respondents said that health was their top priority, demonstrating that today’s young people believe that health goes beyond illness, disease, and treatment to encompass factors like education, job opportunities, environment, and socio-economic conditions.

The second biggest priority identified was the need for better facilities at schools and in communities, with 26 percent of respondents asking for improvements in access to computers, libraries, food, playgrounds, roads, health centers, clean toilets, and clean air and water.

The event saw an array of performances by young people putting forth their demands, a YouthBol anthem created and performed by the young, along with a message from the YouthBol Campaign Ambassador - P.V. Sindhu!

Speaking at the event, Dr. Aparajita Gogoi, C3 Executive Director, explained why a poll like this is so important, “India has a huge population of young people. This 35-crore strong segment can have immense power in determining the future of this country. India’s youth need to have  a say in designing the health policies and schemes that are primarily meant for them. We must ensure that youth voices are included in the process of designing policies, programs and schemes that impact them and help shape their lives. YouthBol is an attempt to enable this.”

USAID’s Acting Health Office Director, Dr. Jiban Baishya spoke at  the event, emphasizing the need for policy makers to take the next step and use the results of the poll. “In this room we have development partners, foundations, civil society organizations, and government representatives in addition to the youth themselves. Each one of us has a critical role to play in expanding access to and the quality of youth focused services. As you listen today, think about how your department or organization can partner with other groups in the room to take India’s youth to the next level.”